Obviously, I’m on a wall hanging ride. Somehow, euphoria kicks in when you’re making these things and then the ideas just keep coming out like explosive…never mind. You get the concept.

I’m still on a high from being mentioned in design blog Handmade Charlotte as part of its DIY Summer Wall Hangings Post. We worked with them at Chairish but they have no idea who I am since I didn’t manage the partnership, so for them to feature a teeny little cell like me in the giant bloggesphere makes my day several times over. It also encourages my DIY behavior, so you can blame them for yet another wall hanging post.

I’m not going to get into the nitty gritty details about how to put something like this together because it is SO easy (I know that I’m beginning to sound like a broken record, but this is one you WANT to listen to). I will, however, cover how I did it in general.

I started by stringing 2 strands of twine on the top pole: one to hang to the wall, and the other to attach to the bottom pole. I strung another strand through the lower pipe (the one that hangs in a semi-circle).

I added some twine using the rya knot technique to the bottom strand (the semi-circle) and wove my unspun wool through the strands. The great part about unspun wool is that it stays put wherever you put it. I finished by tying the strands below the bottom row of unspun wool.

I added a row of unspun wool to the top pole by draping 10 inch strands over the pipe….

…..and secured the wool with twine around the top edge (by tying a knot behind the first strand and stringing the strand through the rest in an over and under manner, then tying a knot around the last strand). 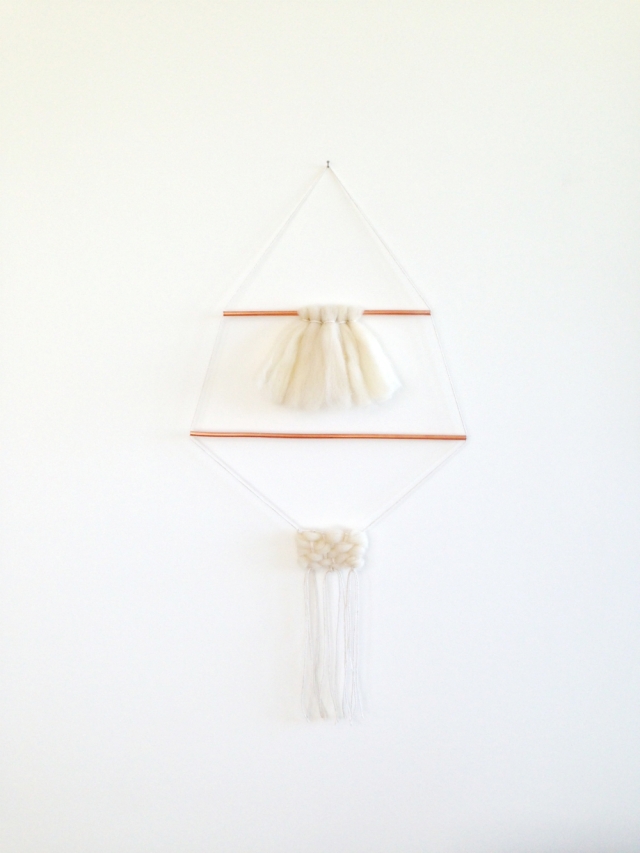 And that’s really all there is to it!!!

Since we’ve run out of wall space (except for the garage), I’m giving this to my brother for his beautifully remodeled Mid-century house. I think it’ll be perfect, and if he ever needs his pipes replaced, well, you know….

3 thoughts on “Oops I did it again: copper and wool wall hanging”