The weather is a common topic of conversation in San Francisco. That’s because there are microclimates up the yin yang throughout the city and surrounding areas, and the seasons are not distinct. When I first moved here, friends warned me of the drastic weather differences from hood to hood. It was such a strange concept to me since I was used to living in the Northwest where the weather is pretty constant everywhere: rain, clouds and rain.

Rain is something that has been out of sight in San Francisco for the last few days. It’s been unseasonable warm — hot, in fact (hot to us equates to anything above 75 degrees F because we can’t handle extremities here). It’s been so “hot” that shorts can be warn in the evening — an occurrence as rare as getting a table immediately at Mission Chinese Food after 7 pm on a Saturday night.

To take advantage of our lottery-winning heat, we gathered at a friend’s Eichler in the San Mateo Highlands. The house was built in 1960 and when they bought it about 8 years ago, they decided to undergo an extensive remodeling of the outside to take advantage of the majestic view towards Crystal Springs. They erected a big deck (go ahead, I know what you’re thinking) that is larger than the house itself, begging all visitors to exclaim, “you have such a big deck!” (I am convinced that this was the motive behind the addition.) 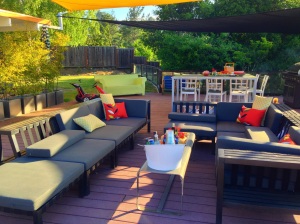 …we spent hours lounging here. There’s no denying the functional aspects of outdoor spaces, especially when the weather is friendly. Throw in an area dedicated to barbecuing and you essentially end up with a second home. 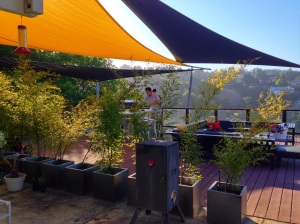 Here’s another angle to give you an idea of the size of my friend’s deck:

They have plans to finish the far end of the deck in the form of an area for the kids, but that can wait.

After all, mama needs a place to chill, daddy needs a place to grill and their friends need a place to do all of the above with cocktails in tow — which is exactly what we did until the fog rolled in and ended our hot weather streak.